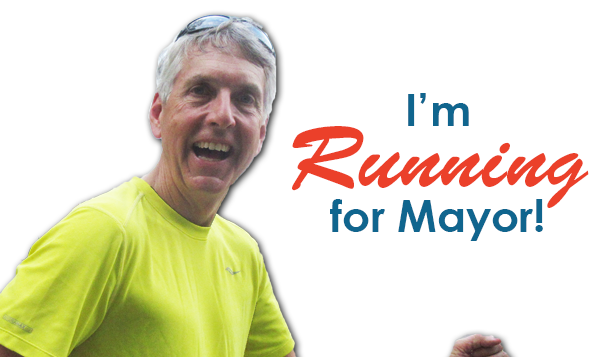 3 Local Candidates Use Social Media to Their Advantage and WIN!

For a long time, yard signs, postcards, and newspaper ads have been the staples in building awareness and name recognition in local election campaigns. Yet recently, three local Concord, NC candidates running for Mayor (Bill Dusch) and City Council (Terry Crawford and J.C. McKenzie) saw the value in adding a strong social media presence to their strategies and how that could extend their campaign reach. Two of the three had very little, if any, social media activity prior to starting their campaigns. 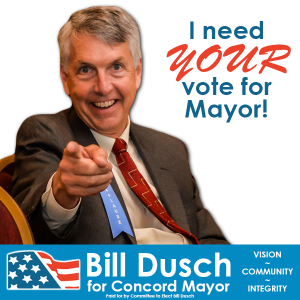 When we were contacted by the candidates, they each told us that multiple people had told them that social media was one of the top things they needed to focus on and that they needed to hire Perry Productions. It was flattering to hear that we were the company that people were recommending, but I was hesitant to take on political clients since things can get very heated on social media around political issues.

However, our team at Perry Productions accepted the challenge and went to work. I was sure that social media would have an immediate impact on their campaigns, and when all three candidates won, I knew that we had created a really solid formula and strategy.

1. Lay Out a Social Media Strategy That Does Not Look Political

The very first thing that I told each of the candidates was that their posts on social media should not be pictures of their yard signs, and two of them laughed when I said that because that is exactly what they had posted before our meeting! Yard signs work great for name recognition and have a place in any election marketing plan, but it is not want people want to see when scrolling through their Facebook page. Potential voters will immediately tune you out become annoyed if that is all you do.

Task number one was to create a distinct and unique brand for each candidate that highlighted their strengths and personalities that we could use over the next several months, so every time voters saw it, they thought of that candidate. There are inexpensive stock photography and vector resources out there to help you create an image, even if you are running on a small budget.

We also asked each candidate to have professional photos taken that we could use throughout the campaign as well as some “human interest” photos that would allow potential voters to get to know them more personally. We were looking for pictures of them doing things professionally as well as in the community, with family, and in their neighborhoods. Our goal with social media was to help the public get to know them better as people and citizens and not just as candidates.

What we loved about working with all three candidates is that they never questioned our strategy and fully trusted our advice. They realized early on that they needed to be out in the community meeting people face to face while we worked on their behalf sharing a consistent virtual message. That virtual message helped them reach a larger number of people on a regular basis that they might not have reached otherwise.

We spent the first month developing posts, branded graphics and plotting an editorial calendar for the next two months leading right up to election day. We kept it to about two posts a week, but when using Facebook’s boost feature, each of those posts would actually loop for almost a week for only $5 or $7 per post. 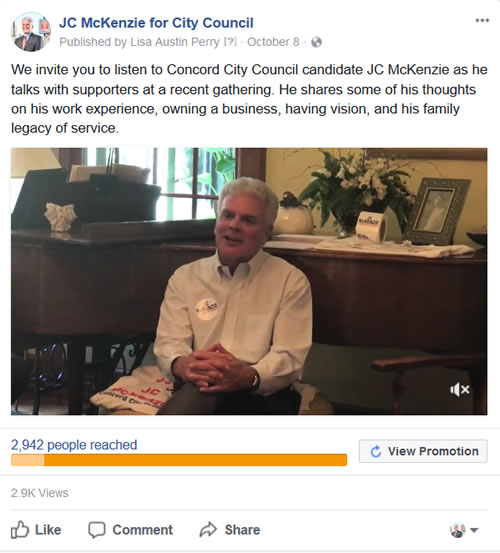 I was afraid the candidates would start asking me to post more often, but I knew that social media users would become frustrated with that. Name recognition is very important, but you definitely don’t want your message to be so over-saturated that people get annoyed.

Those consistent posts also gave their supporters things to share on their own Facebook feeds which we saw happening frequently, and that we think also helped get more people to the polls. People will definitely go out and vote in a presidential election, but municipal elections traditionally see a painfully low turnout. Concord’s 2015 election only saw 3600 citizens turn out to vote. Because of that, part of our strategy was also to make sure new voters got to the polls. The 2017 election turnout increased to 6300! This was a big increase and we were certain that the social media awareness that we created was a major factor. We really pushed early voting as that can be more convenient for a busy, working person to fit into their schedule and we actually saw early voter turnout double this year.

One candidate, Terry Crawford, was actually running against an incumbent who had been in office for over 30 years. He would have name recognition on his side, so we had to focus on getting new voters out in Terry’s case and highlighting his extensive business experience.

For mayoral candidate Bill Dusch, who was running against an experienced and current City Council member, we focused on Bill’s charisma and engaging personality and really did some fun posts. We even incorporated his love of running marathons into some of the posts. Bill also hired a local videographer to do a great series of videos around town talking to voters about his long commitment to the community. We saw huge reach especially with those videos on Facebook and Instagram.

Candidate J.C. McKenzie had the least social media presence prior to the election but knew it needed to play a role in his race. He had the most people in his race, so he definitely needed to stand out. J.C. hired us for every piece of his campaign, from the yard signs and postcard design to the Facebook posts and paid ads. One of his first stops was to local photographer Michael Anderson for photos that we ended up using in a variety of ways over the next three months. He had a very consistent and professional image out in the community. He also focused on endorsements which we actually turned into videos to get more reach on social media. 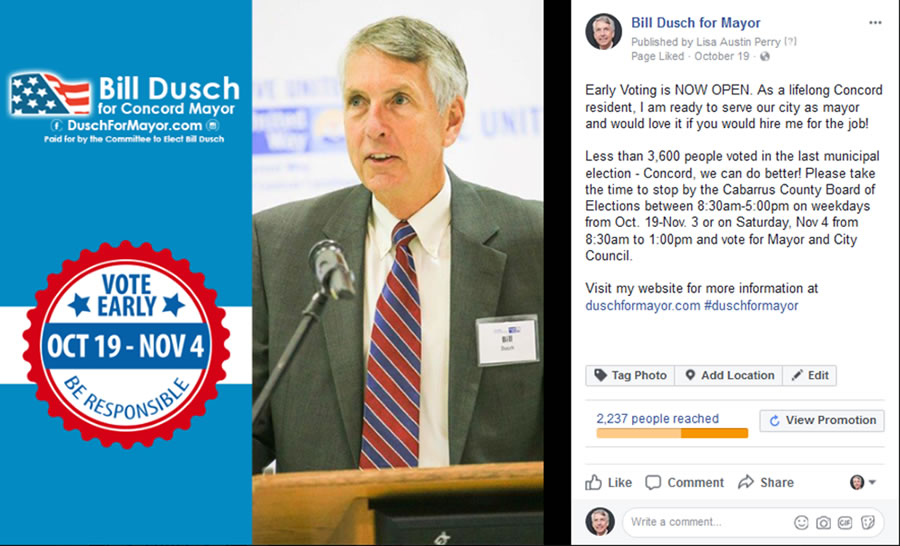 4. Remember That Social Media is a Two-Way Conversation

If you are going to be active on social media, be prepared to manage conversations digitally. People will want to reach out to you and not only will they expect a response to comments or direct messages, but they will get mad if you don’t! Something else to keep in mind is that other people are watching the conversation, and if they see you avoid questions, that can leave a bad impression.

We often get asked about how to respond to the really negative ones or ones from people who are clearly trying to make you look bad. Our advice is to always try to take them “offline”. Don’t get into a debate on social. Let them know that you hear what they are saying and would love to discuss the issue further with them, offering your email or phone number if you are comfortable with that.

5. Use Analytics to Steer the Ship

Even when you outline a game plan months in advance, be prepared to change course when needed. There are many social media tools out there that offer analytics on your posts and evaluate engagement. If you see that something is not working or that a certain post actually exceeded your expectations, you might want to adjust your plan. Facebook’s Insights and Sprout Social are two great resources we use to track reach and engagement on social media.

What the Candidates Had to Say

“I would like to commend Perry Productions on the great job they did on my mayoral social media campaign. From the start, they worked with me on gathering the proper information that would allow them to build a truly professional and aggressive social media presence. Perry Productions developed a schedule for the final 4 months of the campaign utilizing text, graphics and video to create Facebook, website, print and Instagram releases. They adhered firmly to this schedule and released a quality product each time that helped build a positive image of me and my campaign. I appreciate their efforts and know they were a big part of my successful run.” – Bill Dusch, Concord Mayor Elect 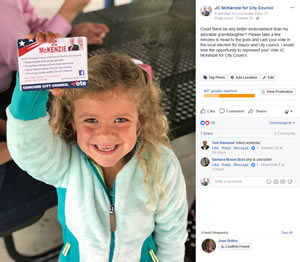 “The team at Perry Productions did a great job with the image of my campaign from start to finish. They put together quality materials that helped me stand out and really amplified why I was running. I appreciated their expertise especially in the realm of social media as I wanted to reach as many people as possible, but have zero experience using Facebook myself. The team at Perry Productions played a major role in helping me get elected.” – J.C. McKenzie, Concord City Council Elect

“I just wrapped up a very successful campaign for in my run for City Councilman for Concord, NC. The end result was that I won the Council seat and defeated an incumbent, which is rare in our local elections. Our campaign was very focused and strategic. One key element was our use of social media. To make sure we went at it professionally, I hired Lisa Perry and her company, Perry Productions. Lisa and I developed a social media game plan and she and her team executed it. We developed a new Facebook page specifically for the campaign. Lisa created a new, fresh look for the page that centered on my campaign platform. As I said, the result was victory. If you are considering running for political office, I would highly recommend Lisa and Perry Productions to develop and manage the social media element of your campaign.” – Terry Crawford, Concord City Council Elect

Regardless of how you feel about politics on social media, I frequently tell our clients…it’s where the people are! But remember to try to use social media to allow people to get to know you authentically and shine a light on what you have already done in your community, both professionally and personally while sprinkling in some of your campaign messaging.

Learn How to Run Your Own Political Social Media Campaign

We are creating a program that outlines step by step how to launch and manage your own campaign on social media. 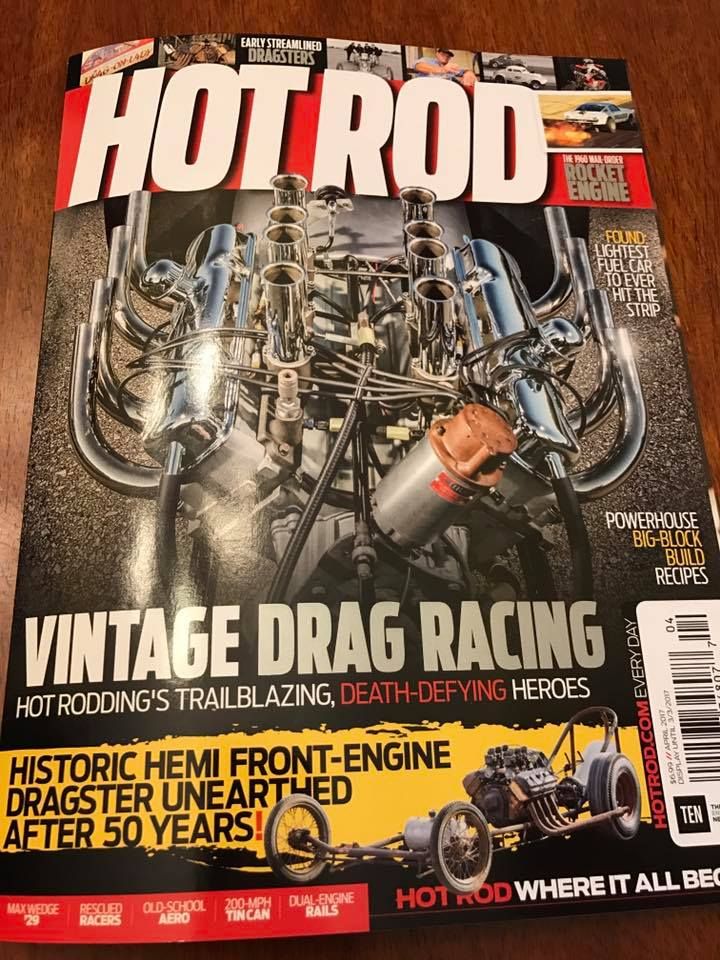 We are very excited for Cruise-In Classic Car Restoration for their recent exposure in Hot Rod Magazine! Located in Salisbury, NC, we are managing the social media and doing a website for this family run business. 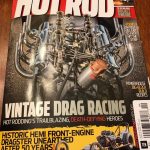 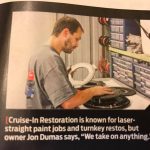 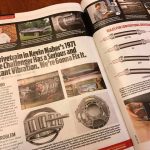